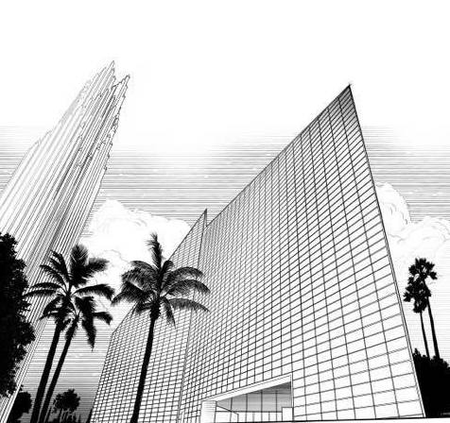 Home
About
Get There
Tickets

By Christ Cathedral Concerts (other events)

GET THERE GET THERE
open in google maps

The Arboretum at Christ Cathedral is part of a 34 acre campus.  Christ Cathedral Parish holds 11 weekend Masses, Weddings,  Funerals and Concerts as this huge congregration awaits the complete of the Cathedral building itself.  The Arboretum, first, the Garden Grove Community Church, (originally known as the Neutra Sanctuary) was conceived by church founder Rev. Robert H. Schuller and designed by Richard Neutra in 1960, completed in 1961. Schuller, promoting his “Come as You Are in the Family Car!” motto, was able, via a balcony that extended outside, to move fluidly between the inside of the sanctuary and the outside. Visitors could sit inside, outside in chairs on the lawn, or in their cars in the parking lot.
The Arboretum recently underwent an extensive renovation and retrofit, winning five prestigious design awards including a Design Citation of Merit from Docomomo. The restoration included the development of a new window system to sensitively replicate Neutra’s original design as well as the rehabilitation of deteriorated fountains and reflection pools, and interior finishes. (adapted from the Diocese of Orange Crystal Cathedral website)
The Arboretum houses an Aeolian-Skinner Organ from 1951, which was moved to the campus in 1996. The "Fred Swann" Organ in the Arboretum is a 4 manual, 82 rank Aeolian-Skinner Pipe Organ installed in 1996. 4,949 pipes and 6 walker digital stops.